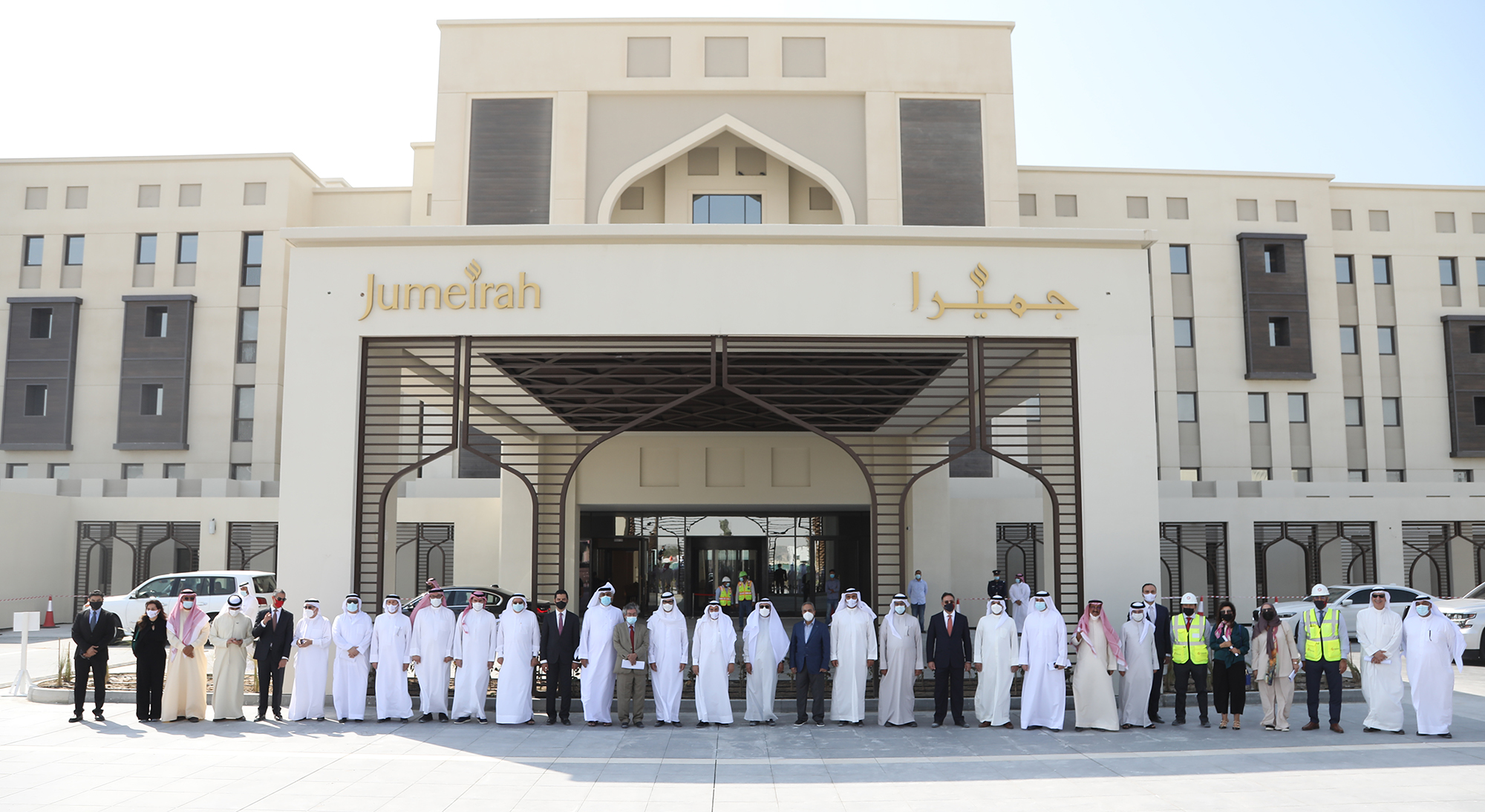 His Excellency Shaikh Khalid bin Abdullah Al Khalifa, Deputy Prime Minister and Chairman of the Board of Directors of Bahrain Mumtalakat Holding Company, today paid visit to the construction site of the five-star Jumeirah Gulf of Bahrain Resort and Spa scheduled to launch in 2022.

Touring the site, located on the southwest coast of Bahrain, a few kilometers away from one of Edamah’s flagship projects, Bilaj Al Jazayer, His Excellency Shaikh Khalid said: “The string of luxury hotels in this area, some built and some still under construction, will strengthen the tourism sector as a whole.

Meeting environmentally friendly criteria, the hotels, including Jumeirah Gulf of Bahrain Resort and Spa, will also support ecotourism as they are designed to attract foreign tourists to the Kingdom’s beautiful natural areas.”

His Excellency Shaikh Khalid was accompanied during the visit by ministers, His Highness Shaikh Khalifa bin Ali Al Khalifa, Governor of the Southern Governorate, and the editors-in-chief of local newspapers. They were briefed on the progress of the work being done on this important strategic project.

In a speech to mark the occasion, His Excellency Shaikh Khalid said that the opening of the facility next year will enhance business opportunities and tourism’s GDP contributions, helping the Kingdom achieve its tourism strategy, which is an integral part of its economic recovery plan

His Excellency said that Bahrain’s tourism map is changing for the better, especially the areas belonging to the Southern Governorate, as evidenced by the opening of Jumeirah Gulf of Bahrain Resort and Spa next year and today’s announcement of the reopening of Bilaj Al Jazayer, which will see the opening of two hotels on its waterfront by 2024. These will complement existing sports and recreational facilities in the governorate.

Meanwhile, Hawar Islands, is witnessing the opening of a hotel, Mantis Bahrain Hawar Island also in 2023.

He also praised the cooperation offered by ministries and government agencies in providing the southwestern coast of the Kingdom with the necessary services and infrastructure, including the Ministry of Works, Municipalities Affairs and Urban Planning, which constructed the South Bahrain Ring Road to serve the area, and the Electricity and Water Authority, which inaugurated the area’s main electricity transmission station and main water line.

The Jumeirah Gulf of Bahrain Resort and Spa is an affiliate of Al Sahel Resort Company, which is jointly owned by Edamah (68%) and Sama Dubai (32%).

Mumtalakat CEO and Edamah Chairman, His Excellency Khalid Al Rumaihi said that he valued the unlimited support and attention Edamah received from His Excellency Shaikh Khalid, which contributed to the company winning the New Hotel Construction & Design Bahrain award for Jumeirah Gulf of Bahrain Resort and Spa at Arab Property Awards 2021-2022.

Edamah CEO Amin Al Arrayed gave a presentation outlining the progress of the 52,000 square meter project, which to date is 82% complete, including a 1.25 km waterfront. It is expected to be completed by the second quarter of 2022.

Al Arrayed said that Jumeirah Gulf of Bahrain Resort and Spa includes of 207 rooms, with two beaches, seven swimming pools, a spa and health club (spa), a lake and artificial islands, and many restaurants and cafes. The project will also offer entertainment options such as indoor and outdoor cinemas, water sports, indoor rivers, and water slides that end in the health club’s main swimming pool, and an event hall with a capacity for 2,500 people.